ICAL's Spotlight
Qatar Innovationeers
Innovationeer English Course
in Doha, Qatar, August 2010
ICAL was commissioned to conduct a 6-week course for a group of Qatari students in Doha, Qatar from June 6, 2010 to July 15, 2010. The class was composed of a group of Shell employees in Qatar who held various positions throughout the organization. Their ages were from early 20’s to one student in their 40’s.
ICAL conducted an assessment of 87 employees from which 18 were selected. Due to various conflicts regarding availability and classroom size, the final class size was 14 persons – 10 men and 4 women. The beginning proficiency ranged from Novice Low to Novice High in all four skills.
The students were uniformly weaker in reading and writing and stronger in listening and speaking. Most were reluctant to say more than a few sentences when asked open-ended questions, especially in areas outside of workplace topics. The goal of our client was to move all students into the Intermediate range.
A secondary goal was for the employees to increase their confidence sufficiently enough to contribute verbally during regular staff meetings, to write reports for their jobs and to give clear presentations to their colleagues when necessary. All three tasks require intermediate English Language proficiency to properly accomplish these secondary goals. A tertiary goal was to give Qataris a deeper understanding of western culture and broaden their knowledge of the world outside of Doha.
ICAL selected two courses from the Innovationeer English series that were based on the students’ starting proficiency and the client’s goals. The first was Trip to New York and the second was League of Legends. The Trip to New York was for Novice learners and League of Legends was an Intermediate “threshold” class. Trip to New York is designed to develop an in-depth knowledge of western culture and League of Legends is a global overview of the Natural Wonders of the World and other world cultures, history, geography, and wildlife.
While involved in these two elaborate simulations, the students were really learning how to think critically, work in teams, develop and give presentations, conduct research, and acquire the 71 knowledge economy and workforce development skills critical for success in the 21st century.
The students surpassed everyone’s expectations. We had been told by energy sector managers and other learning professionals in the oil and gas industry that the “norm” among Qatari language classes was uneven attendance, low participation, and a high drop-out rate. However, our experience from students worldwide has been the opposite - and the Qatari group was no exception.
ICAL measures everything and guarantees ending performance. The Qatari’s attendance rates, their completion of assignments, and participation in a variety of areas was excellent – they were all near or above 90%. We were told these results are atypical of Qatari students, but ICAL’s belief is that students everywhere are capable of achieving high results, if they are taught using a humanistic, student-centered, culturally-appropriate approach that has been ICAL’s trademark for 30 years.
Back to previous page
© The International Center for Accelerative Learning (ICAL) - 2062 Harobi Dr., Atlanta GA  30084 - tel: 404-538-5063 / fax: 775-924-2219 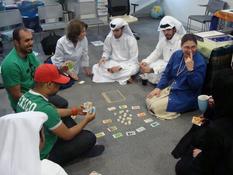